We've eaten this chowder twice since Christmas Eve and every time I forget to take a picture.  On this occasion I remembered to take a picture the day after when we were eating the leftovers for lunch. It doesn't do the chowder justice

This is one of those soups that is 1. delicious 2. easy to make and can be mostly made ahead and 3. works for when you need a nice dinner, but don't have a lot of time to cook.  It's a lighter chowder so it won't leave you feeling super heavy and overloaded with milk and cream when you are finished. We've made it for Christmas Eve several years in a row now and everyone loves it! 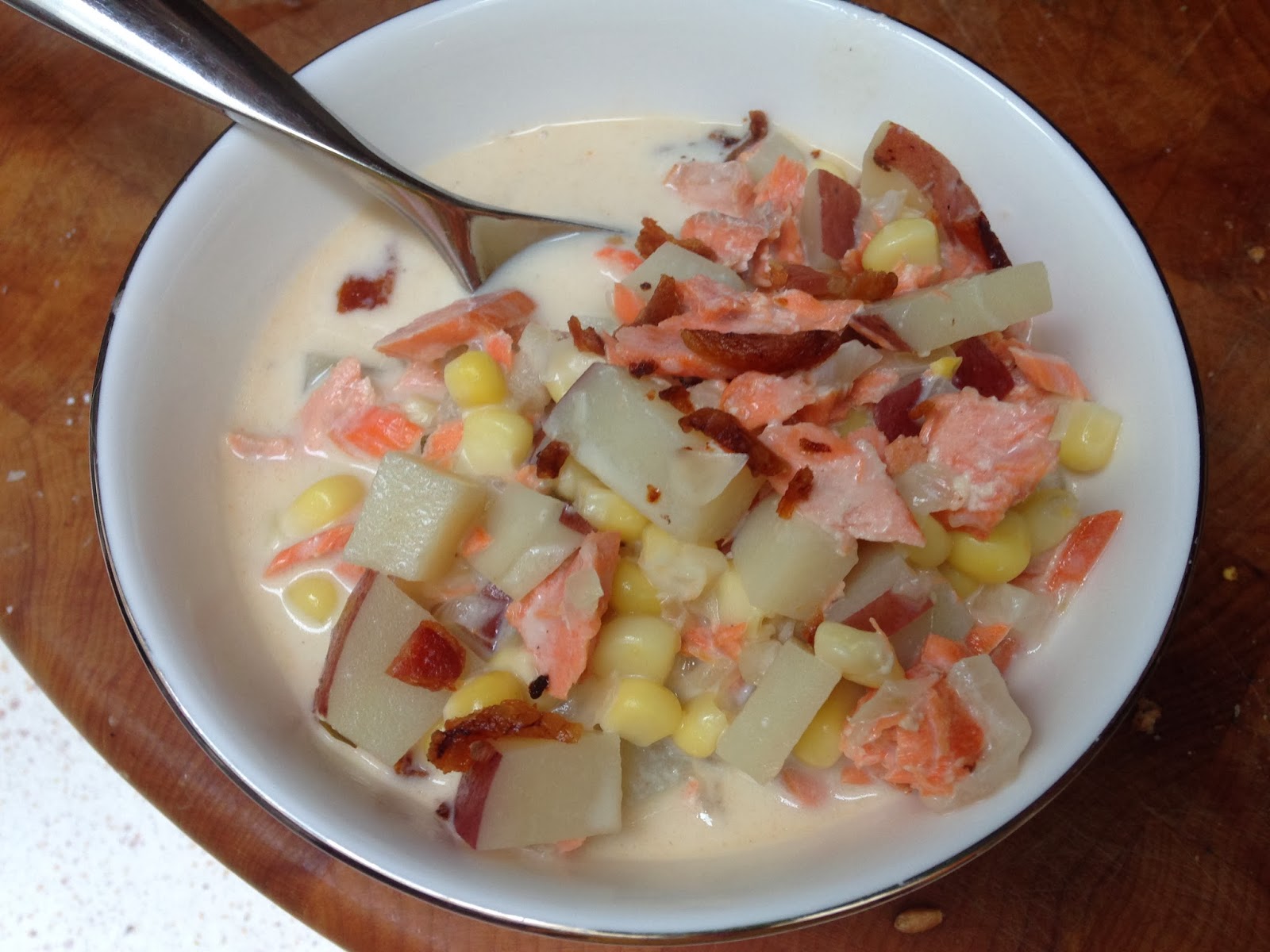 For the salmon: Rub the salmon with some kosher salt and brown sugar (there is no magic amount, but you want the salmon to be covered with brown sugar and salt).  Soak the wood chips in water and start the BBQ.  Once the BBQ is nice and hot add the wood chips (we wrap ours in a tin foil pack and place it on the coals).  Cook the salmon until just barely finished (or a little under done) - it will finish cooking in the soup.  When the salmon is cool enough to handle break it into small pieces.  Place the salmon in a bowl and refrigerate until ready to use.

For the chowder: In a dutch oven or large stock pot cook the bacon, over medium heat, until cooked all the way through.  Remove the bacon and set aside on a plate lined with paper towels.  Pour off some of the grease until you have a thin layer left in the pan. Add the onion and cook until soft, but not browning, about 5-7 minutes. Add the wine and boil over medium heat-high heat until reduced by half, about 3 minutes.  Add the fish stock, thyme and a dash of tabasco.  Bring to a simmer.  Add the potatoes, reduce the heat to medium and simmer until the potatoes are almost tender when pierced with a fork, about 8 minutes. Add the corn, salmon, cream and milk (Be careful not to boil the chowder once you've added the milk or it might curdle) .  Cook until the corn is almost tender, but still crunchy, about 3-5 minutes longer. Season to taste with salt and pepper.

To make ahead: Prepare the salmon per directions above.  You can make the chowder several hours ahead up to the point of adding the corn, salmon, cream and milk.  Do this last step right before you are ready to serve.

Kelly
Our family loves food, good food. We love to eat and we love to cook. We make almost everything from scratch. Healthy food is important to us. I, however, have a weakness for baking so we make lots of sugary treats as well. The way we cook and eat is a definite lifestyle choice and time commitment and as a wife and a mother of 2 small children time is often hard to come by! But we adjust and don't make as many complicated or extravagant meals as we once did - soon enough!